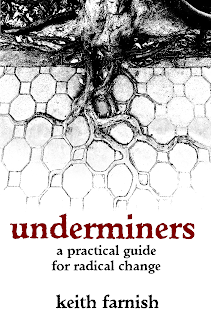 In the last Empire Express I already recommended this book for reading. Today I would like to re-emphasize its meaning as a useful tool in an age of industrialized omnicide. Those regularly following my blog posts might be aware of the concept of “distributed denial of servitude“, which is the idea that every person who is aware of the problem of civilization can do something to reduce its destructive impacts on humans and non-humans alike, by withdrawing their time, mind, and energy from the machine in order to direct them at alternate ways of being.
Keith Farnish’s book ‘Underminers: a practical guide for radical change’ describes ways and methods how to succeed with this.
The book consists of three main parts:
The first part uncovers the “tools of disconnection”, the many ways by which Mother Culture lures, fools, coaxes, pushes, and forces her children into submission. She makes sure that spite is not turned against her, that all fighting remains infighting among citizens, and that those attempting to leave the herd are getting crushed. Knowledge about her ways is not supposed to rise to awareness because as soon as the illusion of her benevolence falls away people start to turn their backs on her. So becoming aware is already an act of undermining the machine.
With the knowledge of the tools of disconnection in mind the second part describes where and how “the culture of maximum harm” can be undermined actively. The goal is to uncover the illusory nature, pointlessness, and destructiveness of the dominant set of living arrangements to individuals or the general public. There are various options like creating ridiculous situations in which the system’s ability to serve its declared goals fails so obviously that people begin to awaken and start to question established thought patterns and institutions. This awakening from illusions is an absolute prerequisite for their being able to reconnect to the real world.
As this activism of a million pin pricks aims at disrupting the machine to the point of its breaking down one could call that — in the widest sense — sabotage. Yet in a legal sense, and certainly in moral terms, there is nothing wrong with most of what underminers are doing. The author stresses, though, that the underminer has to take full responsibility for his/her actions and therefore needs to plan carefully to avoid physical harm to living beings.
At one point the system comes crashing down. Whether it is the outcome of undermining, or whether it is the result in of the system’s inbuilt weaknesses, or whether it dies from exhaustion of resources is only relevant in terms of what will be left of the world for life to go on. Crashing down it will, and rather sooner than later. You don’t want to get caught with your pants down, not knowing what to do. People need a safety net to fall back into. In part three, Keith explains how to extract yourself from the machine’s grip so you may live not only more appropriately as a human being, but you also establish a parallel society that today practices the skills needed in the future. John Michael Greer once published a book whose title perfectly carries the sentiment: “Collapse now, avoid the rush.”
Community building will be a major undertaking here and, as a side effect of undermining, it becomes easier, through realizing how we got disconnected from each other in the first place.
So, altogether, the book is full of great ideas of where to start — right now — with your post-civilized life, and how to help bringing the machine to a halt. Underminers is available from your local or online bookshop, you may read it for free on a webpage, or you can download a free pdf from the same page.

“Cast off our watches (and phones), like my wife has, and it takes very little time to “tune in” to how far along its diurnal path the Earth has rotated, and what point in our wakefulness cycle we are currently at. I can’t see such principles being readily accepted in the world of commerce where time is money and money is the meaning of life, but that’s just one more reason why the commercial world is completely incompatible with human beings. We only have a finite time to spend on this world, with the people we love, doing the things that are truly important. Who the fuck gave anyone the right to steal that time away from us?” — Underminers, p345

4 Replies to “Underminers: Subverting the Machine”