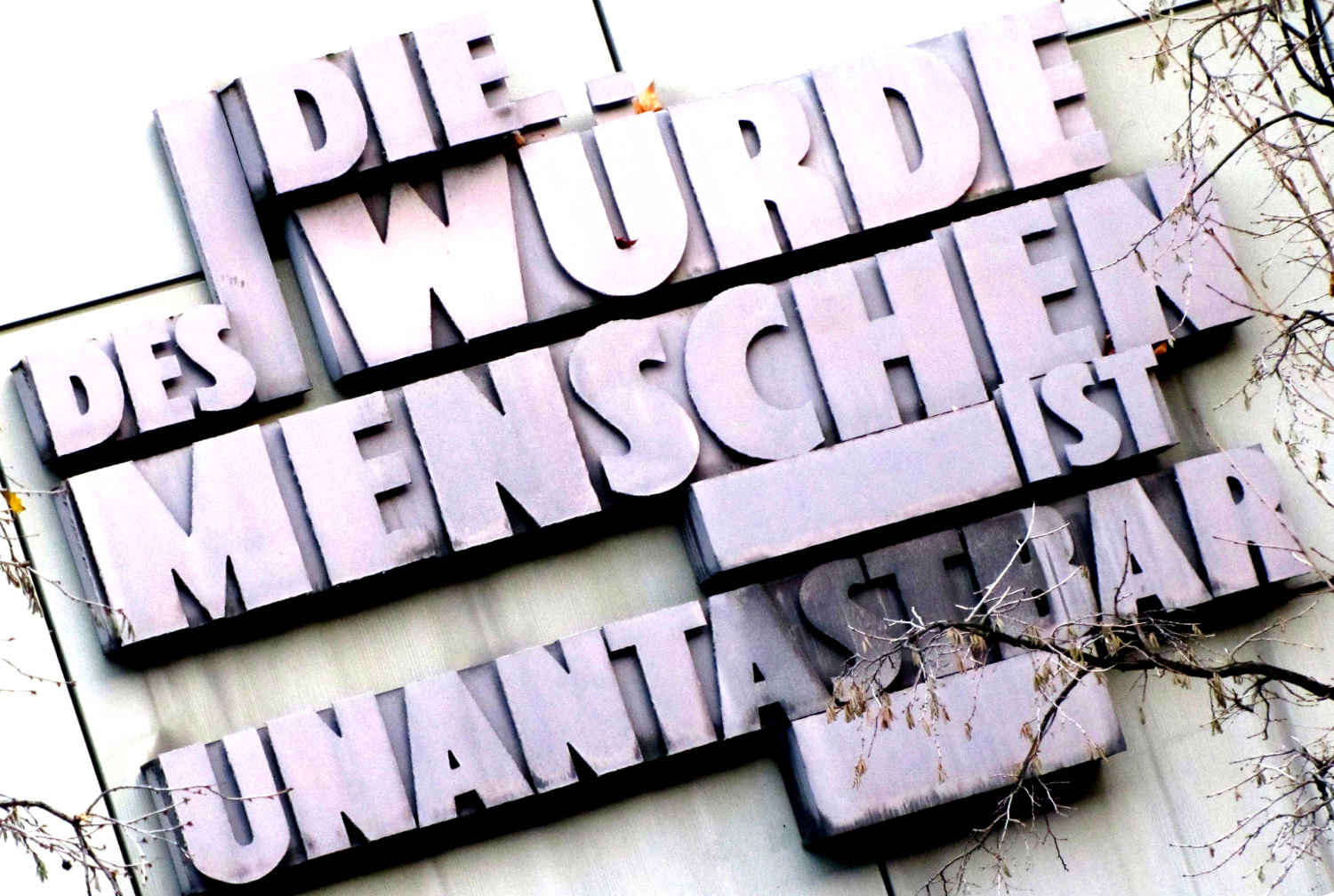 (Image: Article 1 of Germany’s constitution, “Human dignity is inviolable”, inscribed on the walls of the Regional Court of Frankfurt, Main, at the request of Fritz Bauer)

Fritz Bauer, Attorney General in the Auschwitz trial, said in an interview for the Hessian Radio (HR) in 1964 that he was waiting for “the tiniest sign of humanness” from the people sitting in the prosecution bench towards the surviving witnesses whose families had been completely wiped out. The victims’ families, all of Germany and the world could breathe a sigh of relief then [arte film documentary “Fritz Bauer, Generalstaatsanwalt, Nazi-Jäger”; 42:38]. But nothing of the sort happened. At the beginning of the trial they all pleaded “innocent” and stayed with it until their final plea, even though they had to admit in the course of the trial that their behaviour had cost lives. What should they have done? After all, orders were orders. “Befehlsnotstand”, as the German wording goes.
The same thing happened in the other war crimes trials: the Nuremberg Main Trial, the Nuremberg Medical Trial, the Bergen-Belsen Trial, the Ravensbrück Trial, the Dachau Trial, the Mauthausen Trial, the Buchenwald Trial, the Flossenbürg Trial, the Mühldorf Trial and the Eichmann Trial. Would it have been so awful – guilty or innocent – to express some sympathy for the fates of those affected and their families, as is not only customary but inevitable in personal encounters?

Considering that the few hundred who were held accountable in court are representative of the leadership, many of whom escaped justice by fleeing the country or committing suicide, and considering that tens of thousands of employees were actively and directly involved in the extermination machine, and considering further that the common people, who silently collaborated, were unable to talk about their wartime pasts until the mid-1960s, then it is fair to say that, apart from its symbolic effect, the legal examination of the Nazi reign of terror has been a failure. Leading Nazis were able to obtain lucrative and responsible posts in both German states, Austria and also with the Allies, which signals that no effective denazification took place in society either. What is quite certain, however, is that psychological processing, disassociation and reconciliation on a human level were practically completely absent. Nowhere did perpetrators stand by their deeds after the end of the Third Reich.

This allows for two possible conclusions.Firstly, that the war crimes trials produced gigantic legal misjudgments or else equally gigantic legal abuses – in other words, that those sentenced to death were actually not guilty. This is contrary to the apparent evidence of a massive flood of clues, testimonies and proofs, as well as to the simple logic of totalitarian regimes, as can be observed elsewhere, and would be tantamount to Holocaust denial. I would like to leave that aside for ontological and ethical reasons. The second possible conclusion seems psychologically more logical anyway and more probable from experience: that the accused – and with them all those who actively or passively participated in the crimes of the regime but remain silent to this day – are incapable of admitting the evil of their deeds to themselves or to others, and that they are therefore unable under any circumstances to show human emotions, such as Fritz Bauer would have expected from people who had committed a mistake but remained basically decent: There was no admission, no mea culpa, no regret, no remorse, no apology, no reparation. And people like Günter Grass lied or remained silent about their SS membership all their lives. This conspicuous absence of human emotion in the face of the most atrocious crimes prompted Fritz Bauer to quote Hölderlin:

The Third Reich is by no means an exception. The same applies to active participants in the GDR dictatorship, in the Soviet Union and the fascist dictatorships of Southern Europe, for the collaborators in France, Quislings in Norway, the countries of the BeNeLux and from the fascist and later real-socialist vassals Hungary, Bulgaria, Romania, etc. It was the victors who exhibited individual faces of the overthrown regime in show trials and then had their heads rolled for public effect. There was no atonement, no reconciliation, and therefore no new beginning. On the contrary: Helmut Kramer, former judge at the Regional Court of Braunschweig, reported that resentment against emigrants and opponents of the regime had formed among the people because they had allegedly “evaded their responsibility”. Bauer’s hope that the complete discrediting of anti-Semitism would finally make reconciliation between Jews and non-Jews possible was perhaps dashed because the perpetrators assumed that their victims were not capable of this. Yet it was the perpetrators and their sympathisers who lacked both empathy and imagination and thus the will to make peace with the past, the victims, the emigrants and the members of the resistance.

Thinking about the time after the Corona dictatorship, this gives me a sense of foreboding. After all, making a comparison with Germany’s years of terror means for me not only looking at their conditions of origin, their mechanisms of repression and manifestations of violence in order to be able to correctly assess their counterparts in the present, but also to reflect on their end and their overcoming. In view of the fatal post-war years, it is to be feared that parliamentarians who voted for the Enabling Act will assume the most prestigious office in the new state, that torture doctors will head medical associations, that wartime engineers will continue to provide destructive technologies, that ordinary block watchmen will become mayors,that the informers of yesteryear continue to defend the government against the people, that mobs of thugs become policemen, that murderers of the judiciary are now to dispense justice, that a member of the old junta heads a state government, or that the flatterers of the Ancien Regime are allowed to lull the people even after the collapse, as happened in the early FRG.

It is not hard to identify such personalities in our time. It will be more difficult to convince the affronted silent majority not to fall into the same trap again, but to open up to another possible reality: conviviality (literally: living with one another), which says goodbye to disenfranchisement through mass production and to the institutionalisation of all human activities, from learning to mobility and the distribution of goods to health care and the celebration of one’ s faith.

What gives me confidence is the high number, by German standards, of groups that have formed in response to the worsening barbarism; they strive to counter blind obedience to the rules with education and appeals to compassion. It is striking that apart from numerous quasi-religious reactions – from silence to ridicule, distortion of facts, personal vilification, existential and violent threats to actual deplatforming, beatings, imprisonments and assassinations – there is no engagement with the content of the critics of the measures. Therefore, at this point, and hopefully only for the time being, I must conclude my text with an excerpt from Fritz Bauer’s Hölderlin quote:

The virtues of the Germans, however, are a shining evil and nothing more; for they are only makeshift, wrested with slave labour from the empty heart out of cowardly fear, and leave every pure soul desolate, which […] cannot bear the discordant sound that is shrieking in all the dead order of these people. […] And that is why they fear death so much, and suffer all humiliation for the sake of their oyster life, because they do not know anything higher than the fabrication they have stitched for themselves. […]
I spoke for all those who are in this country and suffer as I suffered there.
I now wanted to leave Germany again. I no longer sought anything among this people, I was offended enough by relentless insults, I did not want my soul to bleed to death completely among such people.

Like the quarrels of lovers are the dissonances of the world. Reconciliation is in the midst of strife and all that is divided finds itself together again.