Ivan Illich, in his 1994 Schumacher lecture on the wisdom of Austrian economist philosopher Leopold Kohr, said,
“Kohr was an eminently unassuming man. I would even go so far as to say that he was radically humble, and this aspect of his thought and character tends to disqualify him from inclusion in textbooks. It may also have contributed to the fact that so few have grasped the core of his argument: the prominence he gives to proportionality […] But not many of those who applauded him understood the depth of his opposition to current axiomatic certainties […] Diffidently, he asks you to step outside of what passes for commonly accepted perception […] To consider what is appropriate or fitting in a certain place leads one directly into reflection on beauty and goodness. The truth of one’s resultant judgment will be primarily moral, not economic.” 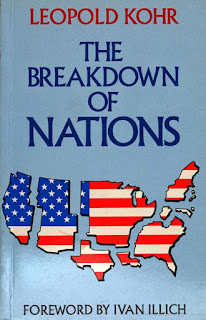 Attempt to think in the way Kohr depicts Ancient and Mediaeval perception. What may seem like a minor difference or outdated view changes the whole idea of how the world works, what is beautiful, or just, or real, or necessary. Through comparison you can then use this knowledge to better understand the dominant worldview and to develop a different culture.
Kohr’s contribution is to be found in his social morphology, says Illich. There, two key words reveal his thought: proportionality or, more precisely, the appropriateness of a relationship. The second is “certain,” as when one says, “in a certain way.” Taking both “appropriate” and a “certain place” together allows Kohr to see the human social condition as that ever unique and boundary-making limit within which each community can engage in discussion about what oughtto be allowed and what ought to be excluded.
This discussion happens within families, villages, towns, and regions, not nation states which are too large and heterogenous. Globalization in particular explodes any possible framework of appropriateness.
Each place has its own culture, and each culture has its own sense of proportions. We arrive at measures through following proportions. A simple example are the historically different lengths of one mile or one cubit which depended on the different proportions of the human body in different ethnicities.
Another example are the different dates for the start of the new year which most often depend on geographical locations and their specific seasons and crop cycles, but also their religious beliefs (14th April in Tamil culture, 11th September in Ethiopia,…)
This notion which has pervaded basically everything from music to cookery to politics to architecture to medicine became extinct through the rationalistic movement that started in the Renaissance. With the victory of Enlightenment in the 18th century it has been completely replaced by absolute sizes and values. Here lies the foundation of modern economics.

Modern economic assumptions based on absolute figures, once incorporated into one’s way of perceiving reality and constructing arguments, exclude ethical options whose object is the good, the harmoneous, the just.

Kohr’s point is that a good life is not to be found using absolute figures and values but through seeking appropriateness, ie. the right proportions, or the right relationship, and that this can happen only locally, or regionally at largest, because the definition of ethical values (or rather qualities) and their ranking may vary from culture to culture and from case to case.
Kohr knew that not any inclination but a certain awareness and feeling, a certain sensitivity to the appropriate, is the necessary condition of friendship. He knew that the historical loss of this knowledge fosters the emergence of social mutations that can be recognized now as monsters.
[Title image: Compas de proportion (wikimedia user Fgrosshans cc-by-sa-3unptd)]