I live in a small space without walls. There is neither clock nor calendar in there, no TV, no radio receiver, no washing machine, no stove; I own five electrical items only – a solar candle, a light bulb, a camera, a laptop, a tablet – and I am committed to not replace the latter three once they come beyond repair. I’m slowing down, inwardly and outwardly. I don’t own a motorized vehicle; I arranged my life in such a way as to be able to rely on my bicycle or walk for 99 out of 100 days. I stopped traveling for pleasure. I use a dry compost toilet. I wash myself and my laundry in a bucket; my daily water usage is around 30-40 liters max. I don’t eat meat. I don’t smoke, drink, or dope. I don’t phone. I reduced the consumption of music and movies and books and sweets and clothes. I wear my stuff for years and years, first for “proper” dressing, then for casual home use, after for gardening, and finally for rags with which to clean floors and vegetables. I live on little more than one Euro per day. I stopped buying stuff, with the exception of bread and some fruits which are not available from the farm, a toothbrush once in a while, some soap.

The list of material items I have removed from my life goes on for much longer. I don’t want to bore you with it. I also think that this is not the most important part of my story of doing less. Sure, the less I consume the less I pollute. But then again, I’m aware that I’m just one man among billions of others – many of whom consume more than their purse allows them to. I also know Jevons’ Paradox, according to which saving resources only results in an overcompensation; somebody else will consume what I left untouched, and perhaps more than that. I am also aware that, compared to a tribal human, I own more things than I probably need. I certainly cannot carry everything at once. I still take flights twice a year, to visit my aging mother. I don’t believe in offsetting. I’ll just quit it once she’s gone. Let’s stay positive saying, there is room for future reduction, to a life like fingerprints on water.

On the plane of the immaterial I am cutting down on many things as well. I don’t protest, campaign, petition. The hectic activity, the anxious frenzy, the omnipresent noise and light and technological stink and the constant advertising and information-pushing begin to cause me nausea. I have downscaled my knowing, reasoning, judging, arguing. That makes it harder to write and talk, but then again, what is there to say that hasn’t already been told by somebody else? And can I really claim I’m right with what I say? Who is that Mewhich tends to inflate to epic proportions? I haven’t found the needle in my haystack of yet-to-be-discarded items with which to collapse the balloon-like person I think I am, but I sure have fun releasing some of its air through the vent. The smaller it gets the less ugly it becomes.

Am I “leaving my mark in this world by not leaving a mark when I leave,“as a Texan musician put it in the late nineties? I believe I have done too much already to achieve this, and I don’t even know whether it’s desirable. Our very existence changes the world, for better or worse. So why don’t we go for the better? My goal is not about reducing everything to zero. It’s rather about chipping away that which is destructive, disturbing, disruptive, delusive; to find the right balance between being and becoming. Like most people in industrial civilization I weigh too heavy on the planet’s capacity to sustain life. That’s why my path leads downward, away from the apex of our culture, towards the foundations of existence.

Owning less goes straight against the paradigm of separation; consuming less is incompatible with the locust culture currently ruling the whole planet; and doing less, to me, is the confession that the complexity of the world is way beyond my understanding. I just don’t know what is good for everybody. I hardly know what is good for me. I’ve got an intuition, and I follow it. I don’t know where this ends but it feels good to trust that feeling, and I do not suffer from less stuff. There is no sacrifice, no loss, no self-denial. It’s rather the opposite – every gadget, every insurance, every untruthful relationship, every idea, every activity that fell away provided space and time for something much more valuable: the essence of it all, the unadulterated sensation of living, the meaning of being alive. Not that I got that to the fullest; as already shared, I still own things, thoughts, personae. Life is becoming more and more interesting though.

Now if you ask me whether I recommend my way to everybody, I say, Of course – not! My pathworks for my feet. What I (do not) do is a manifestation of myunderstanding. You need to follow yours. In fact, you have no choice but to do so. If anything you can only choose what you wish to understand. Maybe that’s a suitable point for starting the revolution, and maybe it starts with understanding less. 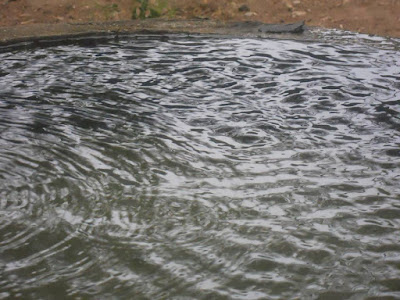 2 Replies to “Fingerprints on water”