I was a Sp4 in the 1/17th Airborne Cavalry of the 82nd Airborne Division at Fort Bragg, NC in 1969… I was in the Army from 1967 to 1970.
During the weekend of the Moratorium, the 82nd Airborne Division was put on alert to go to Washington, DC, to ‘police’ the protest. Leaves and passes were canceled and the Division was ‘briefed’. We were told that the Moratorium was a cover for a violent government takeover by communists that was to be suppressed by any means necessary. We were told we were to go to the Moratorium with loaded weapons and if we felt it necessary to open fire, we would not be held responsible.

To the soldiers, after years of lies about the Viet Nam War, this meant a bloodbath against the protesters was the intended result of the action. At first, one soldier refused to accept a weapon, then more, and after a few hours, it was apparent that the soldiers, many of them Viet Nam Veterans, would not go and obey orders.

Personally, I refused the order at the door to the armory room and was told to go up to my platoon bay and wait. I did so, expecting to be alone in the bay and ultimately be either jailed for life or be killed for refusing orders. At the time, I had decided I would die for my country, if necessary, so I would as easily die when refusing an illegal order. As I sat there, more and more soldiers came up, without weapons, and we sat and played cards, not talking about it, all of us afraid but apparently resolute. I had decided I would rather go to prison than obey an order I consider against the Constitution and the Bill of Rights, which I had taken a vow to uphold. I was ordered to go down to see the Captain, and upon entering the office, I was confronted by a room lined with angry NCOs [Unteroffiziere] and Officers, with my Commanding Officer sitting at a desk.

He asked me if I had refused to take a weapon. I responded by reciting the Constitution that says that people have the right to assemble for regress of grievances, word for word, surprisingly doing it from memory, an astounding act I didn’t know I could do. My CO then told me I had to obey orders and THEN protest those orders. I responded by saying that ultimately it was every individuals responsibility to decide what they will do, regardless of other people’s orders, that I would not go to Washington and kill Americans exercising their rights regardless of orders.

We argued awhile, my demeanor exactly as expected by a soldier talking to his commanding officer, but making clear to him that my decision, regardless of what is done to me as a result, was not going to change under any intimidation. Finally he ordered me up to my bay, saying as I left that he was sorry that the Viet Nam war was not a ‘declared war’ so he could take me out and shoot me. At that point, I was willing to die for the People of the USA if it was decided to kill me, even if carried out by my own Army. I also decided I would be a pacifist from then on, a decision I have upheld since that day. War, regardless of reason, is obviously social insanity committed by an insane institution.

More soldiers were called down and returned. I have no idea what was said to them, because nobody talked about it. There was no ‘conspiracy’, no ‘subversion’, no agenda… it was completely spontaneous and unplanned, before, during, and after. I expected the news to carry the story, but apparently nobody spoke to the press about it. I am not, nor have ever been, a believer or member of any communist or any other ‘ism’. I consider them all equally stupid.

After hours of waiting, play cards and not talking about anything but cards, our NCO came up all smiles and we were given our leaves and passes back, and it was as if the incident never happened. Years later, I heard that the USSR had warned Nixon that if he dropped a nuke on Hanoi, the USSR would consider it a ‘first strike’ and retaliate massively. The Generals told Nixon it was a bluff, so Nixon ordered a nuclear bomb dropped anyway. Apparently the 82nd had to then tell Nixon that the soldiers would not come to Washington, where he was planning to announce the strike from the Oval office, -to be seen as ‘Presidential’-. Knowing that such an announcement might well cause the protesters to come through the fence of the White House like a Tsunami, Nixon recalled the B-52 and the bomb was not dropped. Under the Freedom of Information Act, I heard that the USSR considered the incident as important to them as the Cuban Missile Crisis was to Kennedy and was planning to retaliate just as they had warned. I believe that the world exists now because of the soldiers of the 82nd refusing, en mass, an illegal order by the President of the United States.

Fear separates us from each other. Fear is the key to division, possession, rules and laws and any kind of corruption. Remember “Addendum” where it displays corruption as the dominance of self-preservation.

So would you prefer to fight your fear by seeking security? Or is it more useful not to separate from each other and thus annihilate any conflict before it comes into existence?
What if we didn’t emphasize the ME any more – MY wishes, MY hopes, MY fear, MY interests, MY insight, MY way of life, MY property, MY security – and started thinking and acting as though we really were the change we wanted to see in the world?

For The Zeitgeist Movement is not simply about throwing overboards our belief in money, hierarchy and all the rest. WE are the ones who create our individual self. So WE separate the world into persons, groups, nations, races. So WE create borders, both visible and invisible, and property within the borders. So WE are the ones who create the feeling of the borders, of the property and of our beliefs being threatened. So WE create suspicion. So WE try to protect ourselves through fences, laws, patents, weapons and so on.
So WE are the system we want to overcome.

This is easier understood than actually lived, I know. But there is no way past the dissolution of the self(-interest) or we will end up with the same old mess on just a different day.
Beating the system by its own game won’t serve us well. 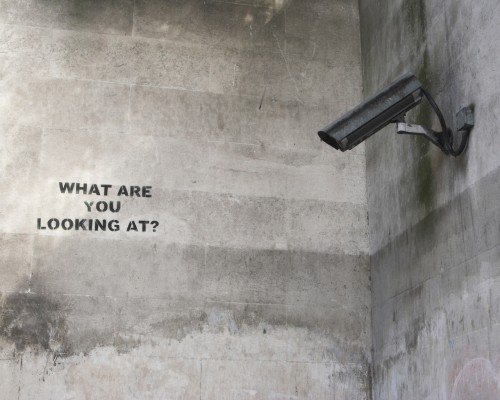 …that poor cat was always outside, watching the carless stragglers. I wanted to pet it but I didn’t because it would make me just as bad as anyone else, condoning its outsideness.
I just kept as far away as I could from that cat, shut my curtains, and pretended I lived on a country lane or on a studio backlot. Finally one day the cat scared the shit out of me…

Just watched Waking Life, a film of 1 1/2 hours of philosophy upon life, death, communication, dream and reality.
The most amazing animated cartoon I ever saw.
No, that is the wrong term. Not animated cartoon. It is a painting alive! A Monet combined with a Warhol, running over the screen like water and oil. Nothing keeps shape for longer than a second, but the persons’ gestures and facial expressions all look so real.
Despite the irritating visual impressions and the partly mind-fucking explanations on what life is about I was able to keep concentration and understand language (English) and sense of what was said – which amazes me once again 😀

The story itself is short: A young man wakes up from a dream, only to find that he is in another dream. Time and time again. Trying to get a hint how to get out he meets people (bon-vivants, psychos, scientists, artists etc) who talk about their view upon things.