Skip to content
Greed and stupidity have always been one and the same. I’d go even further — no one can be as stupid as to ignore the facts for decades, no one can be as clumsy as to create all this mess consistently without sometimes making a better move. Wouldn’t the world make more sense if all this happens not accidentally but intentionally?
Words cannot reach these people. Their minds are focused on self-interest alone. The damage resulting from their actions is neither accidental nor collateral, it’s what it takes to make money and to grab power; they are neither blind nor ignorant nor stupid. From their perspective nothing is wrong with millions of war victims, environmental destruction, social deterioration and the likes. They are textbook sociopaths trapped in the institutional constructs they have co-created in order to feed their self-interest. Nothing we could do or say will change their minds, nothing will change those equally sociopathic institutions from without, and much less from within. They are attempting to twist the world into giving them what they desire, but this is eventually futile and has only led mankind on the road to all-out destruction. You can argue with them, you can plead, you can curse them, you can sue and fine them, you can imprison them, you can boycott or sabotage them, you can kill them – to no avail. It is equally futile and contributes equally to the all-out destruction. 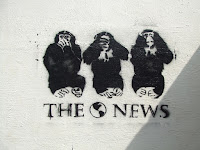 “One of the most pathetic aspects of human history is that every civilization expresses itself most pretentiously, compounds its partial and universal values most convincingly, and claims immortality for its finite existence at the very moment when the decay which leads to death has already begun,”
–-Reinhold Niebuhr

The first step in our effort to end Empire’s reign of terror is to awaken to the cage we are living in. The documentation of the tyrants’ lies and deeds becomes important so that we can understand what’s happening and to take decisive moves towards starting the liberation. But let us not get stunned with bygone horrors, let’s not get stuck with pointing fingers at those who offer themselves as targets for our hate. Break the hypnotizing stare; switch off the hellish mass medial noise that keeps you from listening to what’s within you. The lesson to be learned from the disaster is how to do it better. As a matter of fact, our bodies know already from three million years of evolution of our genus how life works for human beings.
No need for anybody’s permission, no need for anybody to join us, no need for changing what-is, no need waiting for better conditions; we just set out on a different path, one by one, clan by clan, tribe by tribe. The way to overcoming the omnicidal system they are deliberately perpetuating is to concede our complicity in the crime and to take a different road from today on. The way to overcoming the life-grinding machine leads to alternative structures based on alternative values emerging from another worldview. Where they are greedy we are giving. Where they are hating we are loving. Where they see one way only we walk an infinite number of paths. Where they are trapped in cold logic we are free to see for ourselves. Where they are divisive we are one, and that includes ‘them’, for ‘they’ are not separate from ‘us’ even if that is what they believe themselves to be and what they would like us to believe too.