Skip to content
The Yurugu blog series attempts to uncover some of the myths the dominant culture is based upon. As we have a hard time seeing the things we take for granted the view from outside, through the eyes of a different culture, may help with discovering our biases and enable us to act more consciously.
Marimba Ani, the author of the book “Yurugu. An African-centered critique of European cultural thought and behavior,“is not involved in putting up the series and does not necessarily agree to its contents. The series is also not meant to present the book’s central thesis, or to agree one-hundred percent with it; rather the blogs are inspired by the deep thoughts Marimba Ani has put forward, and offer some of them for consideration.

As my readers, by now, may assume – and rightly so – that no part of European thought, life, and culture has escaped Yurugu’s influence, it is safe to say that the arts do have a role to play in exerting power over the “Other.” The forms of expression and the institutions of our civilization are thoroughly shaped in the image of Yurugu.

John Zerzan writes about the origins of art,

Art, like religion, arose from the original sense of disquiet, no doubt subtly but powerfully disturbing in its newness and its encroaching gradualness. In 1900 [Yrgo] Hirn wrote of an early dissatisfaction that motivated the artistic search for a “fuller and deeper expression” as “compensation for new deficiencies of life.” Cultural solutions, however, do not address the deeper dislocations that cultural “solutions” are themselves part of. Conversely, as commentators as diverse as Henry Miller and Theodor Adorno have concluded, there would be no need of art in a disalienated world. What art has ineffectively striven to capture and express would once again be a reality, the false antidote of culture forgotten. – Running on Emptiness: the Failure of Symbolic Thought

As art must reflect the nature of the asiliwe can expect a society deeply split into the haves and have-nots, to produce an equally split-up arts scene. Indeed, observing developmentsover the millennia, we can seea clear division between an elitist “sophisticated” conception of arts on the one hand, and the “kitsch” itemsthat ordinary folkscreate on the other. Of folk music, I once heard somebody say that, “Pigs can’t help oinking.”
While professional forms of art historically often served to establish a certain story of people’s nature and place in the (hostile) Universe, namely their position in a society’s hierarchy, today’s arts degrade the vast majority of people to consumers. The artist, though, cannot perceive herselfas a pure dominator. She, in turn, is subject to the overarching power of economy, and she is, thanks to the strong premise of separation, fundamentally alone with herself. When she expresses her visions in her art she will help to proliferate that premise. Her expression is perceived as uniquely hers. Whether she can reach anybody else, and whether anybody else is able to deeply relate to what she expresses, cannot be made sure. Following the fashion of the day is the only way how she hasa chance that she can make a living from her work. Marimba Ani writes,

European art becomes increasingly “a commodity manufactured for the market” tending toward the vulgar. We should point out that the interesting contradiction in European culture is that its art may be commercially inspired (“the artist must live, after all”), geared to consumption, inspired by the desire for recognition, and at the same time remain an elitist form, that is, essentially separated from the people, because the art, like culture, creates (controls) the people, rather than the reverse. According to Sorokin, in the artist’s tendency to disregard religious and moral values, the art itself

“comes to be more and more divorced from truly cultural values and turns into an empty art known euphemistically as ‘art for art’s sake,’ at once amoral, nonreligious, and nonsocial, and often antimoral, antireligious, and antisocial.” [Pitirim Sorokin, The Crisis of our Age, 1941, p56] 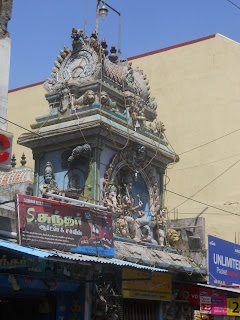 Strolling through Indian villages, the only obvious kind of art we can see consists of expressions of the religious. The notion that people, nature, and gods are closely interrelated, is still very strong in rural areas. Yet in the cities – the gates through which the floodwaters of Western civilization press into the lives of average Indians – the scenery has become overgrown by a jungle of industrial design – advertisements, economic buildings of concrete, steel and glass, and political monuments – to which the spectator is no one but a subject to power: the power to dictate order, and the power to trigger desire. Bearing only few reminiscences to India’s pre-colonial culture, the form which art, music and design take are dictated by international standards nowadays.
It sometimes seems impossible to escape the omnipresent public cacophony of such products, and I wonder why all these people here simply accept the violation of their mind space. Perhaps they cannot stand the emptiness of a plain surface, or the loudness of silence any longer. Perhaps the lack of attention-grabbing artifacts would make them aware of that other gaping, hurtful void – the one inside. So, “It’s got to be Rock’n’Roll to fill the hole in your soul.” (ABBA). When the flooding of the senses ceases to work, when one day it “doesn’t bring the same reaction from inside your brain” (Savatage), it’s time to end that specific kind of division of labour which condemns the majority of people to stay passive consumers of the arts.
Let music, fine arts, sculpture, architecture, theatrical play, and storytelling come into existence by using your own imagination. What are the values of your community, what are the stories that connect and empower people in your place, and what is the fertile ground on which humanity’s purpose in the Universe can grow? Wouldn’t you like to express, for once, something that is truly important to you? What would art look like when it works towards the ending of the need for art?