The following is a synthesis of some thoughts collected at a three-days discussion at the Friesenheimer Sommeruniversität last week-end and at another discussion simultaneously happening at the facebook group “The Six Blind and the Elephant.”
I think it is necessary to point out that, if we are actually desiring human unity, the path to its realization cannot imply divisiveness and fighting-against. In my community we are talking about ‘unity in diversity’, meaning, we accept that we are born, and have evolved, differently; all of us are diverse expressions of the One, and it doesn’t take for all of us to look the same, think the same, act the same. We are already one, whether we notice this or not. In the early stages of becoming aware of it, as an intellectual concept only, there is sometimes the desire to manipulate or force others into complying with this concept. What if we got everybody, every single individual, to accepting this idea? But that’s not unity, is it? We’d get a collection of seperate beings at best, mental tyranny at worst, so there is no use in this.
The Universal Consciousness oberves itself through the varied lenses of our individuality. It laughs at our attempts to stuff parts of its infiniteness into arbitrary boxes arranged into random hierarchies of ‘better’ and ‘worse’, and it is amused in the same way about efforts to counter the unfolding fragmentation with levelling differences down. Both movements, discrimination of differences and denying differences, are an expression of the notion that we are separate, independent beings.
The path to unity leads through acceptance of, and respect for, our many differences, our diversity. There are no two people on the planet, no two stones, no two trees, no two bacteria, or even two electrons that are the same. There is always something to distinguish two entities by, if only by their position in space. There are things that make us alike, though, which allows us to say, This is a human who is sharing common human traits, and this is a tree showing similar characteristics like others of its kind. To focus on the set of attributes which makes each of the readers of this essay a human being means to focus on our fundamental unity as humankind. But to value those attributes over other sets of attributes separates us from other beings. And to value certain characteristics like white skin, leftist ideology, or middle-range income, higher than other characteristics, again, results in separation. Yes, we are diverse; but it’s the judgment of our differences as higher or lower, better or worse, that sets us apart and makes us think we were incompatible with each other.
As for ‘narcissists’, ‘thieves’, ‘destroyers’ and other groups we have identified as ‘problematic’, it helps when we apply different language. Instead of sticking a label to somebody and thus saying that eg. thiefing is a certain person’s particular character, we could say that s/he has stolen, or that s/he has shown thiefing behaviour; this small change in grammar changes our own reality big time and allows us to believe that this person has other character traits as well. S/he is not only about stealing and s/he has the capacity to change their way. Instead of prohibiting (and finally eliminating the ‘problem’, and the person with it) we may ask, which unfulfilled need drives this person or group to acting as they do, and what can I do to help meeting this need differently.
This, of course, takes some time and is a matter of personal interaction; it can rarely be achieved on a large scale with thousands or milliions of people, though a supportive environment may help with fostering change. On the other hand, from what I understand, it is important to know that manipulating somebody into doing something, the top-down approach, and the demand for immediate satisfaction are part of how the world arrived at its current state. Do you see how all of this has implications for what we can or cannot do to establish a more balanced, harmoneous situation?
When we perceive ourselves as different from, let’s say a ‘thief’, or when we are being labelled ‘thieves’ , it always takes a reference point perceived as ‘normal’. But that makes the ‘other’ and the ‘normal’ obverse and reverse faces of oneand the same leaf. So, in all our diversity we are basically one. We could say that the common denominator of being normal and of being different is being — what an amazing realization to have… 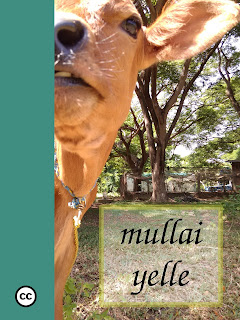 To the organizers and participants of the Friesenheim event, I’d like to express my thanks for the many questions put, help offered, food shared, kind words spoken, and inspirations given, and all of that so freely. This was one great gathering of people willing to support each other in our search for truth and freedom, and I guess most, if not all of us agree that there is an intimate connection between the two.

I’d love to offer those who’d enjoy to continue our discourse on ‘Being Different’ — contact me by commenting to this blog or by writing me a mail. Marianne and Reimer know my address and may pass it on.

On another note, a few copies of my booklet on life in rural Tamil Nadu are still available for free. Would you like to have one?