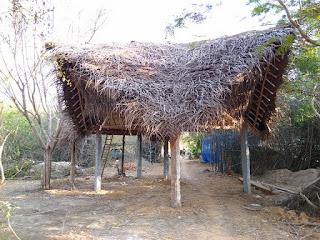 This kind of building is usually described as environmentally friendly because it is mostly made of biodegradable stuff, but one has to see that seven billion people living like this would require unimaginable amounts of raw materials:
Monocropping of timber and of leafy plants would eat further into the already distressed environment, requiring also huge amounts of water. Stone quarries cut ugly wounds into the landscape as well. The overall environmental footprint of mankind probably would become worse than it is already.

The problem lies with the amount of land, power and resources needed to sustain a population this size, even if we all agreed to eat less, consume less, move less, and use less electricity.
One way or another this dilemma has to be resolved — and it will. Whether we will like the solution is another thing.
But let’s spare ourselves the discussion. Words rarely make a difference before experience verifies them.