Skip to content
How many times did I hear people talk about human natureas if they wanted to say, “Sorry, shit happens”? As if humans were like that: greedy, competitive, murderous, meat-eating bastards, a species innately flawed and incorrigibly evil. As if humans had no positive characteristics – other than their superior intelligence gone ape, of course. If they had, it couldn’t be part of human nature, could it? 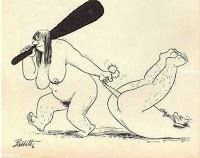 Well, I don’t know… The way that term human natureis normally used, “human nature, being what it is…,” appears to me like a cheap excuse by the speaker for not being willing or able to change any of their fucked-up habits.

It’s funny, anyway, that you can meet people all over the world who just don’t fit into any of the patterns human natureis said to contain. If there is such a thing as human nature, there’s certainly not just one of its kind. Rather a multitude of natures, like there is a multitude of cultures. Nobody speaks of “the” human culture. Have you ever heard that expression outside Iain Banks’ science fiction novels? I haven’t.

With people showing all kinds of virtues, the observation I made in them – and in me – is that we have the ability to act in beneficial or damaging ways, to nurture or to consume, to love or to hate, to be aware of our True Self or to be selfish, to be curious or to be indifferent etc. We have the whole range of ways of living in us, and it depends on a variety of factors during our immature years how we are coming of age.

Observation may tell you that, as adults, again, we are not stuck with what growing up in this gruesome culture of ours has made of us. We may awaken, we may change our ways, we may learn to think and speak and act differently, and that means that we are not victims of human nature, no matter what human nature is meant to imply

So if human nature,independently of what it supposedly is, has no ultimate power over us, it is a pointless, useless concept to consider when we discuss ways of addressing the challenges of our time. Chuck it in the waste bin.