Skip to content
Welcome to 2017, a year that is going to be different from what we are expecting for it. We all know that our hopes and fears rarely stand the test of time and that the future is a place unlike anything we have imagined. But what if the world was already a different place from what we perceive it to be? What if we are missing some vital information, like, there is a price tag attached to the way we live which we have overlooked – or rather blinked at – all the time? Won’t the creditor show up at some point to collect the debt we have piled up so recklessly? Is 2017 our last chance to save our face by stepping forward to mend our ways?
With all the busy-ness around the xmas season, have you had an eye on the news? What were the headlines in the past few days? Did you get the following one?
“Arctic temperatures soar to 30 C above normal”
This could easily be the most alarming piece of information in all history of mankind so far.
Why?
Because the sun over the North Pole has set three months ago, yet temperatures are rising both in water and air and have locally been crossing the melting point of ice – for the second time in two months, and it is happening within the second consecutive winter.
Average air temperatures on higher latitudes, while still below freezing point, are way above any reasonable deviation from standard. 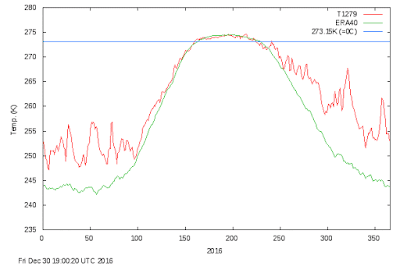 red line shows 2016’s average temperature north of 80° latitude;
green line shows 1958-2002 average temperature north of 80° latitude.
This is not just freakish weather. Last time the red line roughly followed average records was in 2004, so we are looking at a long-term heating trend here.
–click to enlarge–
[source: Danish Meteorological Institute]
This means, instead of building up, winter sea ice is stagnating slightly above already-reduced summer extents and volumes. Thin, broken-up and slushy ice is going to be very vulnerable to the return of spring. The Blue-Ocean Event, an ice-free Arctic Ocean, becomes quite likely in 2017, and it would not be mistaken for a blue-lagoon event.
[source: Polar Science Center/APL]
The Arctic ice shield is being battered since decades already, and its volume and extent reduced so much that scientists are talking about a death spiral. 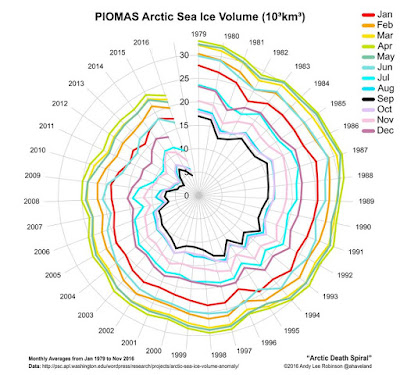 –click to enlarge–
[source: Polar Science Center/PIOMAS]
The loss of albedo along with reduced cooling of the surface water and its direct exposure to sunlight will rapidly heat the sea surface, and an increased mixing of surface and deep waters thanks to wind-driven movement subsequently allows for the heat to reach the methane clathrates in shallow places like the East Siberian shelf. It is to be noted that minimal increases in water temperature may allow for a burp of 50 gigatons of methane from that area alone, with thousands of gigatons more distributed all over the Arctic.
[interview with Russian Arctic researcher Natalia Shakhova]
Methane is a very potent greenhouse gas of which there are currently 5 Gt in the atmosphere. The amount likely to be released would increase atmospheric levels from currently 250% above pre-industrial standards to significantly higher levels, resulting in an increase of global average temperature by another 1.1°C or more within weeks. Thanks to about 70 self-reinforcing feedback loops that have already been kicked off, runaway heating as calculated by the next graph seems guaranteed. 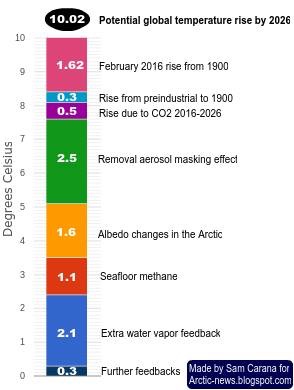 –click to enlarge–
[conservatively adding up a few sources of heating]
All of which affects our ability to grow food due to heat waves, water shortages, more severe storms, erratic weather patterns, and the outpacing of crop plants’, bees’, and soil micro organisms’ ability to adapt.
The consequences of impaired food production are all too obvious.
Wars over water, arable land, and other resources would destroy even more habitats and bring down civilization for sure. Once we enter the slippery slope of a downward population curve, through wars or through starvation alone, there is no turning back; humanity’s estimate lifetime from there on is numbered in months.
The prolongation of our lives is depending on an exceptionally cold arctic spring and summer 2017 to allow for fresh ice to be built up which would postpone Blue Ocean for another year or two, but I wouldn’t bet a lousy penny on that one. It is not that I don’t like to live and see this planet thrive in turn, but industrial civilization has consumed Earth’s life forms to the point where our own demise has become due, and overdue, already. Climate change is just one of a myriad of destructive forces unleashed by our culture, from social disparity to plastic pollution to structural violence to frankenfood to endless wars to animals’ habitat loss; we cannot drive hundreds of species extinct each single day and expect our own survival to stay unquestioned. At one point it is going to be our own food chain that is collapsing.
Notwithstanding probable effects of a Blue Ocean Event, few people seem to know that the current level of carbon dioxide in the atmosphere, according to paleoclimatic records, already subsribes us to a 6°C rise in global average temperature.
They don’t know that current temperatures are the result of pollution from decades ago, and that, since then, we have significantly increased emissions again, the consequences of which are yet to manifest, and that’s unstoppable. 6°C. You cannot go back to undo it. 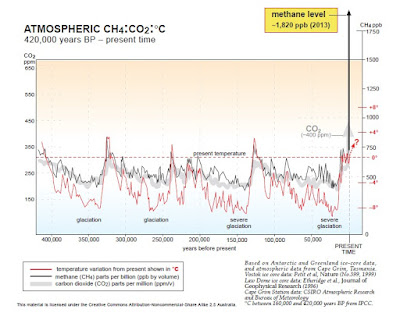 Carbon dioxide, followed by Methane, followed by Temperatures; graph covers last 420,000 years and establishes close link between greenhouse gases and global average temperatures
–click to enlarge–
The figures are public, their relation to real-life consequences established and in its first stages already visible as predicted — just way earlier than expected (haven’t you noticed how often this phrase pops up recently?). Yet we don’t hear about the polar situation on TV; they missed it three times in a row already. Nor are politicians setting out to doing something — and they never will, like they never did. As a matter of fact, the opposite is happening: economic growth (and therefore pollution) is being fostered and promoted while the climate debate is being trifled. Apart from very few counter examples, scientists are afraid to speak up, while IPCC and COP conferences are playing down the issue: outdated figures that are conservative to begin with are being fed into inadequate climate models which do not consider powerful feedback loops like methane and water vapor; those models therefore soften probable effects and postpone them into a distant future. On top of all that, draft reports have to pass through a lengthy consensus-making process including both scientists and politicians. This has consequences of its own:

First, the scientific goal of 1°C maximum temperature rise has been changed into the political goal of 2°C.
Then, pre-industrial baseline has been shifted from 1750 to 1880, a date when most of Europe and America were heavily industrialized already; this removed 0.3°C temperature rise from the IPCC’s calculation, yet the 2°C goal has not been corrected to 1.7°C.
Baseline has been shifted again, this time to the average of 1951-1980, and we can see already attempts to shift baseline yet another time, to the average of 1979-2000, from the date when satellites allowed for gapless observation of Earth’s surface. The upper limit for warming, 2°C, has once more not been adjusted accordingly for the temperature rise that has happened between 1750 and the new baseline dates. In other words, public debate is engaged in window dressing.
In truth, we are talking about an already-reached 1.6 (Carana) to 1.95°C (Mann/Beckwith) temperature rise since 1750, a good proportion of which has happened within the last three years (roughly 0.5°C in 2016 alone).

Neglecting the discussion about precise figures, it still remains a fact that, with the relatively small rise in temperature so far, we are experiencing a massively increased amount of droughts, wildfires, superstorms, floodings, temperature anomalies, monsoon failures, crop failures, algy blooms, ocean acidification, landslides, animal die-offs, ice-sheets melt-offs, methane releases from permafrost and see floor, etc. In such a situation, not the slightest temperature rise is desirable, yet it happens — and it happens quicker than expected.

Following political and economic leaders, many ordinary people are in denial, though most are simply ignorant of the data and its meaning.

If you are one of them — that’s fine; Godspeed, and may you enjoy a long and happy life. Sorry I bothered you. Be free to proceed business as usual.
This summary of current events is based on the work of some of the foremost scientists and journalists, crosschecked with my personal observation of weather patterns as well as my understanding of the World, and it is meant as a warning to those who do have a basic understanding themselves; people like my mother of 65 who immediately got the point and who wanted to know more. She said she had guessed we were in trouble because she had sensed something was wrong with the World, and that the TV was feeding her lies instead of explanations on the disquieting things she had seen. “I’m not stupid!”, she grumbled.
Bottom line is, Time is short; it always was. Our lives have always been limited in extent, yet we are wasting so much time on fighting for peanuts. Extreme events, though, reveal extreme evil. If abrupt climate disruption, if collapse of civilization is a reality you share with me, it makes a lot of sense to prepare for near-term impact so that we get through the turbulence with as little violence and with as much dignity as possible. Each of us can, and should, work to direct public outrage into constructive channels, withdraw our support from war preparation and management, share knowledge and resources, and do our best to reduce suffering for others — humans as well as other beings. This requires us to stay calm ourselves. It can only get achieved through acceptance of our predicament. If, thus far, you haven’t grieved for the Earth and what humans have done to it, this is your place to start.
It have been those rare scientists who did speak up and preceded me in concluding that abrupt climate change leads to near-term human extinction who made this blog possible, first and foremost professor Guy McPherson, but also Sam Carana, Peter Wadhams, Paul Beckwith, and a host of great writers and speakers like Dahr Jamail, Carolyn Baker, Robin Westenra, Jennifer Hynes, Kevin Hester, Deb Ozarko, Derrick Jensen, and Mike Ruppert, as well as courageous news anchors like Thom Hartmann and Paul Henry.